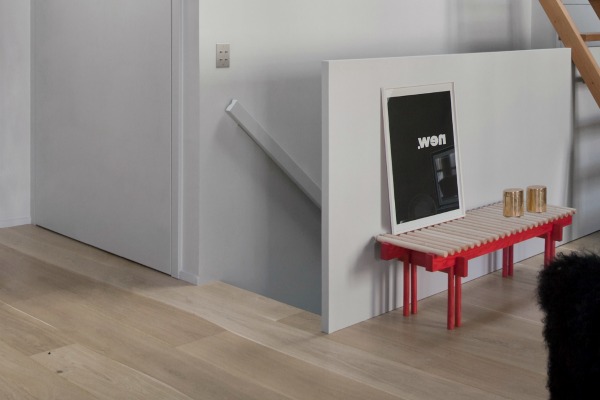 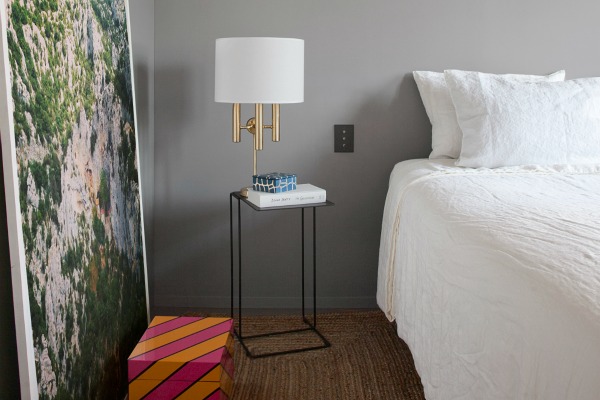 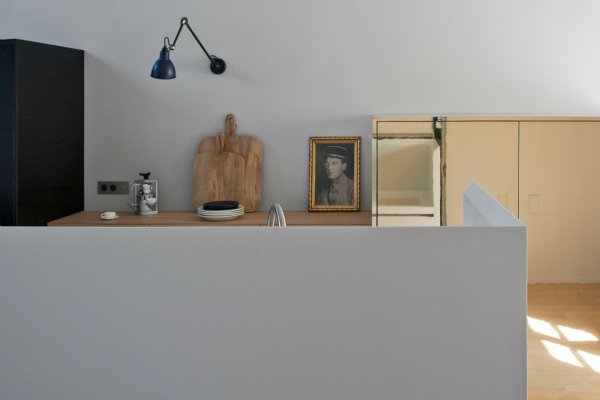 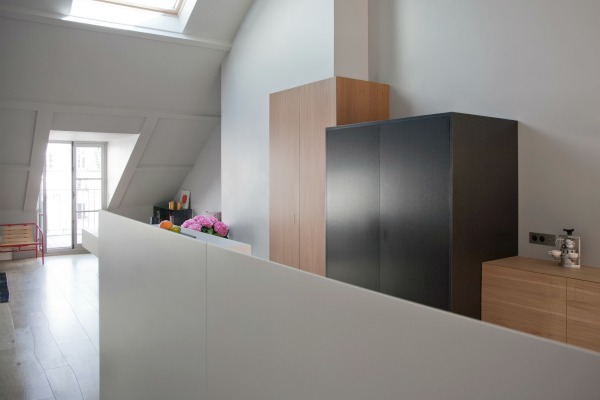 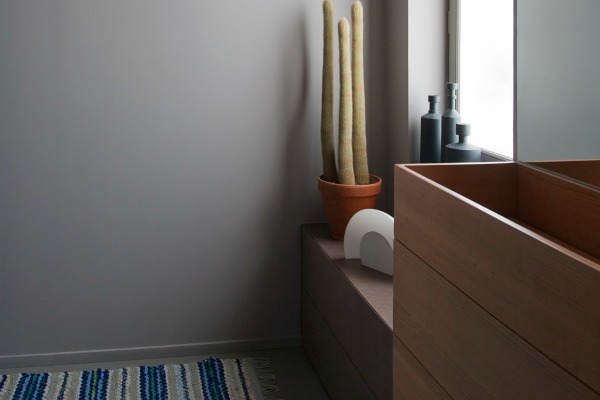 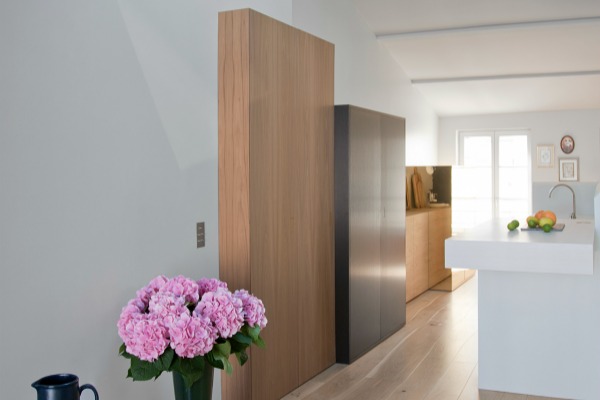 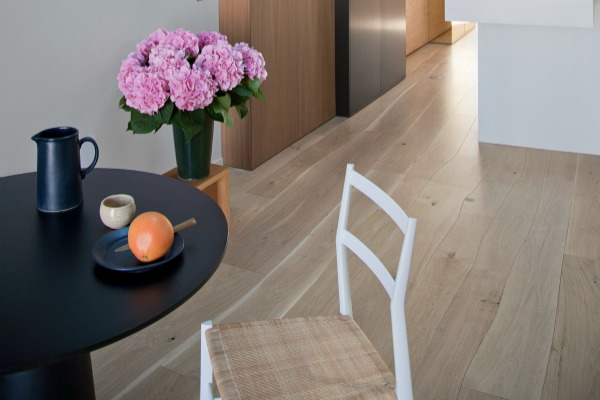 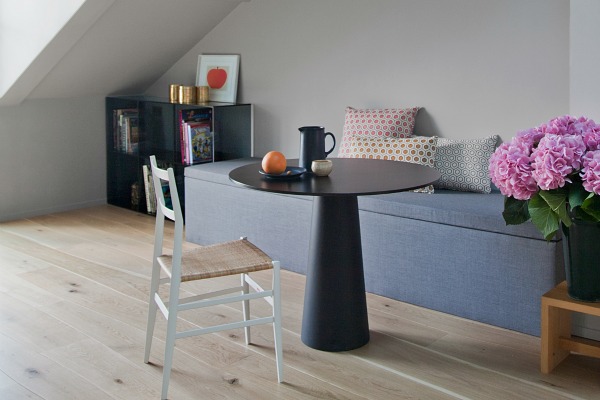 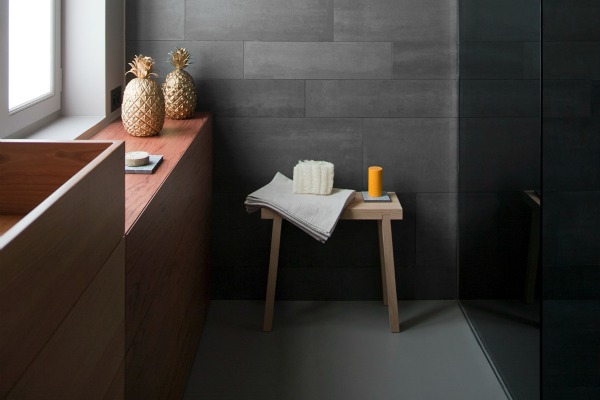 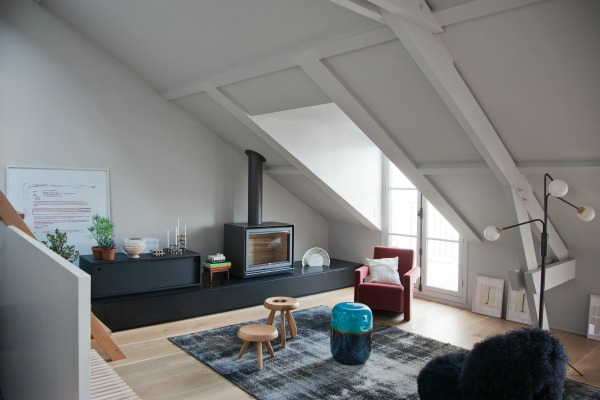 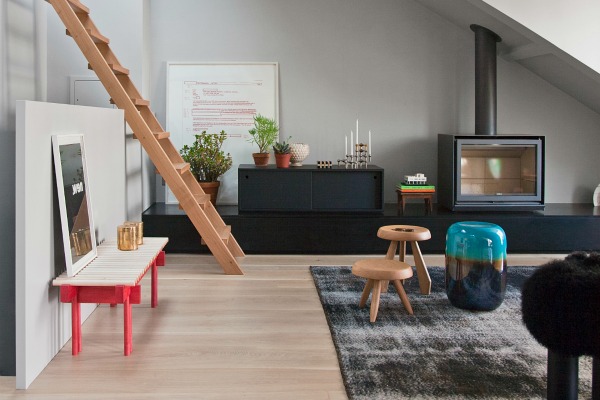 RMGB agency is located in Paris, specifically in the area called the Sentier, and was created when Baptiste Rismane accepted participation in the exhibition of modern furniture FR66, where he met current partner, designer Guillaume Gibert.

The upper part of the duplex consists of a large living room, dining room and kitchen. Designers say that it was necessary to combine these three parts into one, in order to achieve the right dose of harmony and positive environment.

The walls and floors are painted in the same shade of color, while the kitchen furniture, designed using blocks of various sizes and materials, create an abstract landscape. Continuation of these blocks leads to a dining room with custom-made bench and a small library, which is masked by slightly tinted glass. There is also a guest room, and a little spare bathroom.

In the lower part of the duplex, just like the above, there are floors and walls that are made in identical shades. The color is brighter here, while the entire area is exposed to natural sunlight, creating that warm atmosphere. A long corridor leads to the bathroom, dressing room and a large bedroom for the owners.

The RMGB agency, located in the Sentier neighborhood in Paris, was created after Baptiste Rischmann accepted an internship at the contemporary furniture showroom, FR66, on Rue de Renard in Paris, where Guillaume Gibert was working at the time.

Prior to this encounter, both had followed different paths: Guillaume, originally from Marseille, studied cabinetry before studying at LISAA in Paris, a school for interior design and design. Baptiste, originally from Toulouse, graduated from ENSAD in Paris with a science degree, far from that of applied arts.

From this partnership they began to confront their common interests and inspirations for design and architecture discovering the works of the masters: looking to designers Jasper Morrison, Achille Castiglioni, Stefan Diez, and the Bourroullec brothers, and architects John Pawson, Sanaa, François Champsaur, and Studio KO. Through these inspiring mentors, they developed a real sense for detail which is evident in all of their projects thus far.

“Anything that can spark interest before our eyes is the source of an idea. This is often lies in the details: a well thought out ensemble, a unique material, whether in architecture, fashion or even a plate in a restaurant...”

Their first big project was the renovation of the old JOB cigarette rolling paper factory into a loft on Rue d’Hautpoul in Paris. What soon followed were new projects in Paris and surrounding provinces. RMGB’s creative philosophy holds craftsmanship in the highest regard creating interior

spaces that combine different materials by playing with their appearance, color, texture, focusing on elements that evoke emotion. One of RMGB’s main initiatives is to introduce and integrate craftsmanship within globally contemporary works, whether in private homes or future public projects.

"Architecture has something unique and static, while design can multiply and evolve.”

RMGB’s signature style is refined, sharp and contemporary which reigns through every project.

The agency is currently working on several private projects , the showroom of a furniture dealer along with a series of pieces for the Great Design Gallery that were presented at the furniture fair in Milan this past April 2015.