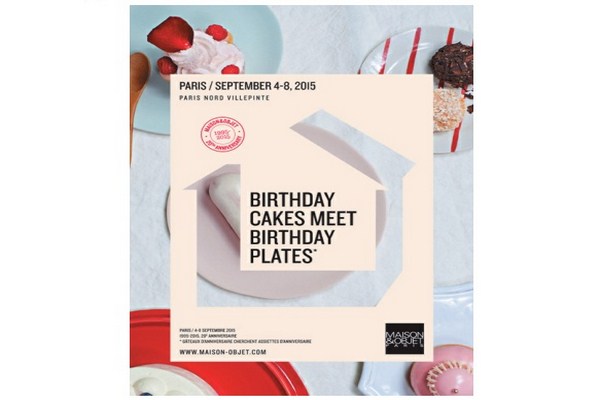 In September 2015, MAISON&OBJET PARIS reorganises its offer and launches a new Luxury, Design & Interior Architecture hub, that will take up all of Halls 7 and 8, with the sectors NOW! DESIGN À VIVRE,SCÈNES D’INTÉRIEUR and MAISON&OBJETPROJETS.

In the heart of this new hub, the Inspirations Forum embodies the session’s theme, chosen by the Observatory’s members : PRECIOUS.

“The theme Precious came forth as a metaphor for that which is rare and unique. It distinguishes the return of well-crafted decorative arts, but also the fashion of excess.” François Bernard, Trend-Setter and member of the MAISON&OBJET Observatory

Among the other highlights of the hub, don’t miss the café decorated by MAISON&OBJET PARIS Designer of the Year Dorothée Meilichzon, the Talents à la Carte, a selection of six young design talents, an installation by Japanese designer studio teamLab, and the MAISON&OBJET PROJETS Awards.

Read along for a quick overview of the events of MAISON&OBJET PARIS September!

MAISON&OBJET PARIS unveils its new Inspirations Forum, made up of the Trends Area, enhanced with a pop-up bookstore and conference space.

“I’m presenting a sensible itinerary that has raw material as its starting point. I want to evoke something along the lines of alchemy, which leads us to the second part of the exhibition, where preciousness becomes more intangible, more poetic and mysterious.” Elizabeth Leriche, Trend-Setter and member of the MAISON&OBJET Observatory.

Vincent Grégoire takes over the design and scenography of the pop-up bookstore.

“I wanted to echo the identity of its cover: white, gold and apple. Visitors will be immersed in a dream world that will explore the symbolism of the forbidden fruit and the Garden of the Hesperides.” Vincent Grégoire, Trend-Setter and member of the MAISON&OBJET Observatory.

Dorothée trained at Strate College Designers and at the Rhode Island School of Design, where she studied industrial design. Aged just 27, she decided to set up her own design studio and launched the multipurpose agency CHZON in summer 2009.

She often collaborates with craftspeople to create unique pieces and highlight hand-made creation. This expertise allows her to create unique, timeless decors that everyone can make their own.

A lover of old objects that carry history, she trawls through junk shops and ea markets in search of objects that carry memories, which she interprets with a touch of humour and irony. And she puts the nishing touches to her historically charged decor with a few contemporary pieces, often from small craft collections.

Among the projects she has worked on, she has designed a number of hotels and restaurants in Paris, London, New York City and Ibiza.

Every MAISON&OBJET event provides a space for expression to six up-and-coming names in the world of design, offering them a chance to present their work to professionals from around the world.

For the upcoming MAISON&OBJET PARIS show, held 4-8 September 2015, a selection of six fresh design talents, all French, will be showcased !

The Japanese of the design studio teamLab come back to MAISON&OBJET PARIS in September 2015 to amaze us.This time, they bring us an installation called Floating Flower Garden, inviting you to step into an interactive garden. A real sensory as well visual as olfactory experience, to be missed under no cicumstances!

Every year, MAISON&OBJET PARIS organises the MAISON&OBJET PROJETS Awards. This international contest rewards the most innovative products presented at MAISON&OBJET PROJETS, the sector dedicated to high-end architectural solutions. Among the exhibitors that took part in the contest, ve nalists have been shortlisted and will see their projects submitted to a jury of interior architecure and design profesionals. On September 4, the winner’s name will be revealed during the awards ceremony, held at 6 pm, at the Conference Space (Hall 7), where they will be presented with the prize.